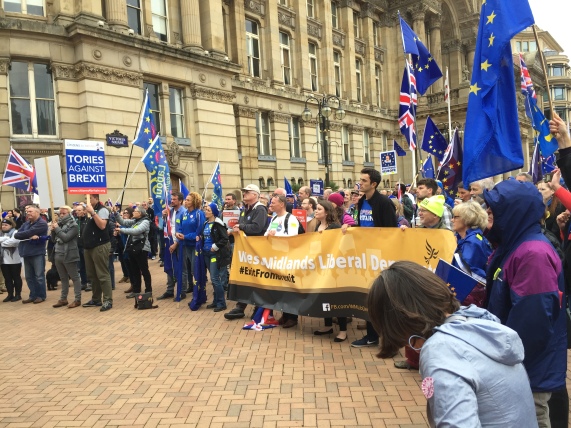 Buses will be leaving from Brunel Street, City Centre or opposite Goose pub, Kings Heath.

They still have a few seats left including free places for students and people who otherwise would not be able to go. You can book them here:  Bus tickets to London

Liberal Democrats and the Greens are the only parties that have consistently championed Britain’s membership of the European Union. We believe that Britain’s best chance to succeed is within the EU.

While we respect the outcome of the referendum held in June 2016, we believe that Britain is a more prosperous country when we are part of the world’s largest economy, working in partnership with our closest neighbours and allies to tackle the biggest challenges.

We believe that free trade is a good thing. It creates jobs, increases prosperity and helps pay for things like the NHS, schools and public services.

It is becoming more and more clear that the final deal will not deliver any of the promises made by the Leave campaign prior to the referendum,  which is why we are also calling for the government to give the British people a vote on the final deal that they negotiate with Europe.

The terms of Brexit will have a huge impact on jobs, security and the opportunity to travel and live abroad, and the Tory Brexit government should therefore be made to put their deal to the British people before it is finalised.