This week our Hall Green MP Roger Godsiff voted with a dozen other Labour MP’s to torpedo the Cooper and Grieve amendments, which would have been a way out of this nationally embarrassing Brexit impasse and also voted for the batshit crazy Brady amendment which kicks the can down the road.

All these things making a hard chaotic crash out Brexit more likely.

This is despite his writing to his overwhelmingly remain supporting constituents to say ‘I do not believe Theresa May’s deal is acceptable to the majority of my constituents and will not be supporting it’ and ‘I will not support proposals to leave the EU without any agreed deal’.
Labour propped up the Tories on immigration the night before (Roger didn’t even bother to vote). And now they’ve propped up the Tories on Brexit again.

Britain deserves a better opposition than this chaotic Labour Party – and the Liberal Democrats will provide it.

If you want to send a message now is the time. Join us to fight against this chaos.

Join the Lib Dems for £1 a month

I’ve been a member of the Lib Dems for two years and have found nothing but support, encouragement and unity. We don’t argue, we work together. We are a small force but we punch above our weight when it comes to holding the bigger parties to account, both locally and nationally in a whole range of issues.

Help us to make your voice heard – in Moseley, in Birmingham, in the UK and in Europe 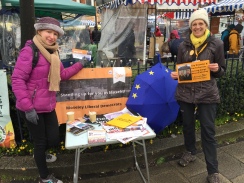