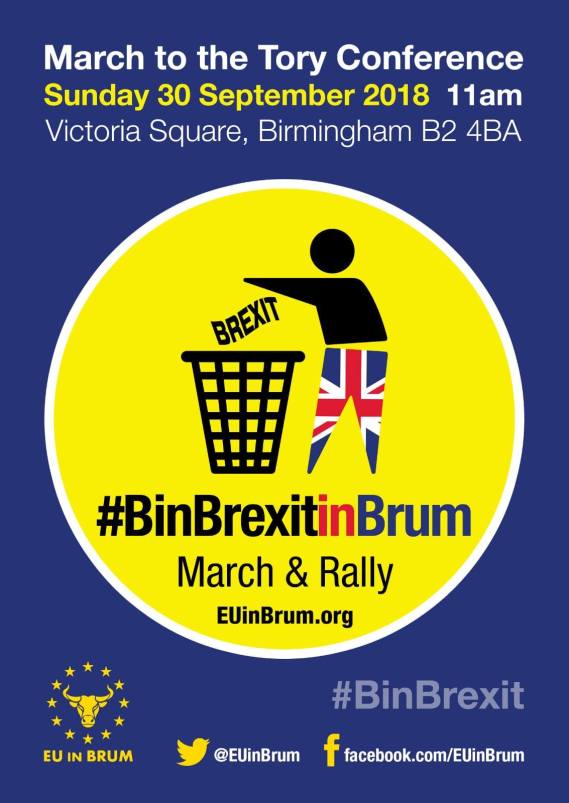 On Sunday Lib Dems across the West Midlands will be taking part in the ‘ Bin Brexit in Brum’ march and rally in the city centre.

This event has been entirely organised and funded by local people in their own time – the grass roots remain movement ‘EU in Brum’  – to remind the Conservative Party conference participants that the Midlands do not want to leave the EU, as any kind of Brexit will hurt the region a lot.

All evidence points to the fact that the West Midlands Economy will be damaged in any scenario, but especially devastating will be a no deal Brexit. Birmingham Mail. Devastating effect of no deal Brexit

It is becoming clearer by the day that no Government is going to be able to deliver any of the promises made by the leave campaign before the referendum. No one voted to make our region poorer and the  consequences that would result from loss of manufacturing and closure of small businesses.  There is no such thing as a ‘Jobs first Brexit’.

Come to Victoria Square from 11, the march will leave there at 12pm and return around 1pm for the rally, where we will have exciting speakers and music including Moseley band The Lost Notes.    The Lost Notes

The touring musician industry would be especially hit by loss of freedom of movement rights and customs checks on equipment.

The event will finish between 3 and 4.

While we want you to bring as many flags as possible,  part of the march will go along the tram lines at Corporation Street, so any flag poles should be under 2.5 meters long, and carried very carefully through this part.

If you can volunteer as a steward for the march and/or rally, or for litter picking afterwards, please get in touch with hello@euinbrum.org . Or message Izzy. Any help is very much appreciated.