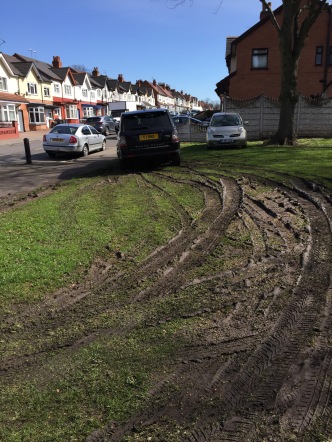 On Wednesday at The Moseley Meeting I supported residents in bringing up the issue of constant parking and driving of vehicles on the open grass verges where Stoney Lane meets Yardley Wood Road  between Esme Road and Phipson Road. 90 residents have signed a  petition  calling for trip rail or other preventative measures to prevent the parking.

The Anderton Park Residents Association have been asking for these measures for some time, they campaigned years ago to stop the  green space being built on, but since then they have seen the road become more densely used by traffic, witnessed the grass being damaged by an increasing number of cars and vans being driven and parked on it and experienced children being deterred from playing there. They have in the past planted bulbs with the school children from Anderton Park School, and they regularly litter pick to keep it tidy. At one stage the area was even costed up for trip rail, but it was never installed.

I have had email conversations with the head of the Parks Department and the District Highways Engineer  over the last six months to ask for trip rail to be installed.  Springfield Police have . been contacted to deal with the parking on the grass, which is illegal. Letters were sent by Highways to the residents and several fixed penalty tickets were issued by PCSO Peach. However this has not deterred drivers from continuing to park on the grass area. As one individual or family stops doing it another takes over. The council departments have been supportive but a more long term solution is needed and we need funding to make it happen.

I have witnessed myself numerous instances of cars and vans parking and driving across the verges.  The area does not have any other safe green space for children to play close to their homes and  children play on the greens whilst cars are parked there. If the green verges were railed off to prevent vehicles accessing them we would create a nice safe space for families and children to enjoy and the residents  could utilise the space for  other family friendly projects such as bulb planting, games and community events.

The council would not have to repair ruts, potholes and damage to the pavements caused by heavy vehicles and police time could be better taken up with other issues. The green space is also important to help reduce the traffic pollution in the area

The green verges are wholly in Sparkhill Ward, however the petition shows there is a demand for this action from residents of both Sparkhill and Moseley Wards.   There is a budget for each ward to use for verge protection and minor transport measures. This is a small budget and there will be other needs to be considered in both wards however I believe this project should be seen as a priority need. It is possible if necessary we could fund some of the cost through an application to the Active Citizens fund or other similar scheme.

I  have sent the petition, together with photos to the Councillors for both Moseley and Sparkhill wards, the Police Sergeants for each ward ,Mike Hinton of the Parks department and Garry Dalton, the Highways Engineer and I have offered to work with them to get approval and find funding for this scheme. 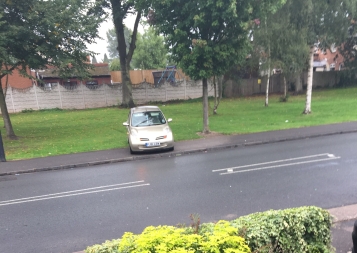 One Reply to “Preserving our grass verges”